Liana Gabel to Perform at BSP 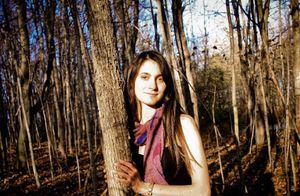 On her upcoming debut CD Rest and Heal, New Paltz-based singer/songwriter Liana Gabel finds an idiosyncratic sweet spot somewhere between traditional vocal jazz and impressionistic, surreal indie pop. The sound is truly her own; but to throw some pins on a map, imagine the lazy waft of Billie Holiday meeting the spiky dynamics and alien siren appeal of Bjork on Major Seventh Street in Mr. Rogers’ neighborhood – with vibes, strings and horns. It is a friendly, generous sound, but one with an unshakable hint of weird.

As their slippery titles suggest, songs like wacky and beautiful “Fundamental Sweater” and “Heart by the Hand” are openhearted and affirmative, but oddly elusive when you try to pin them down. To anyone who has followed Gabel’s career, Rest and Heal sounds like a natural culmination of the work that she has been doing in the New Paltz area for a number of years now, bringing together the stylized jazz inflections of her group Liana and the Michaels with some of the bedroom-Beatles flavor of her collaborations with the talented songwriter Oscar Bilger of the Jings and Lightning Bug. And it sounds like something more than and different from either, due in part to the performance and production contributions of Los Doggies, a chameleonic New Paltz band that is equally at home with absurdist prog/rock and sweet, naïve Minimalism.

On Saturday, May 4, BSP Lounge in Kingston hosts Liana Gabel’s album release party, featuring an expanded version of Gabel’s band. New Paltz stalwarts Breakfast in Fur and the Breath Collective will perform as well, along with the Pick Pockets from Rochester.