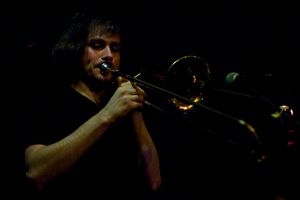 Just because it isn’t summer doesn’t mean that there can’t be any music festivals. Satisfying that summer longing with its Northern Liberties Winter Music Festival, The Fire provided a whole lot of Philly-lovin’ in the air this past Saturday.

Starting off the night was City Rain, with a special DJ set, complete with LED lights and plenty of dancing. Vocalist Ben Runyan even spit out a few bars before ending City Rain’s set with “Stay Inside.”

Break It Up occupied the floorboards next by fueling the crowd’s feet with quick, buzzy guitar riffs. During their set, they performed a new song “Amplify,” and finished the night out with “Architecture,” which left Dan Morse scraping his guitar neck in a semi-circular motion along the stage for a rousing hum.

When Arrah and the Ferns took the stage, everyone was given a thought to ponder for the night - “where does a photo go when you delete it?” According to scientific data, digital space has mass, so it can’t just disappear - keep thinking, folks. Arrah Fisher introduced her new guitar, which still remains nameless because of an on-stage debate of its gender. While Arrah and the Ferns had the crowd discovering answers to profound thoughts, the band put on a rousing yet soothing set with plenty of folk-fun and up-beat country moments.

Conversations with Enemies pumped up the crowd via its tropical essence and touch of ska. The band had the audience getting physical by throwing a life-size inflatable cactus into the crowd as if it were a beach ball. The cactus stayed afloat of hands as Conversations with Enemies emitted a bunch of new tracks. Towards the end of the set, and after invitation, three fans joined the band in dance and song on the stage for “Hoist the Sails.”

Dangerous Ponies’ high-energy set gave everyone plenty to dance to and look at with their colorful sound and fashions. “This next song is about girls, my favorite thing,” Chrissy Tashijan declared as she introduced “Honey Trap.” As the set went on, members of the band jumped from the stage to slow-dance with fans. Dangerous Ponies ended the night with fan favorite “When You’re in Town,” but shortly after the crowd was chanting for more.

5, 4, 3, 2, 1…Happy New Year! The Extraordinaires set began with a countdown to midnight. While waiting for faulty bass string, Jay Purdy broke out in song, covering Roger Miller’s “You Can’t Rollerskate in a Buffalo Herd.” Earlier in the day, the band played for a four-year-old’s birthday party, and Purdy announced that their song “Pen Pals” will also “be a song for a kids show..that doesn’t exist yet.” The night ended with Zach Poyatt belting out the Isley Brothers’s “Shout” (which was most likely a homage to Animal House’s Otis Day and the Knights performing across town at The Blockley) before and after “Hi-Five the Cactus,” with a special appearance, again, by the inflatable cactus.

Day five of the six-day music fest was definitely a memorable one. The energy was high, the crowd feeling loose, and if you had no one to dance with, a life-sized inflatable cactus and band members were there to help.