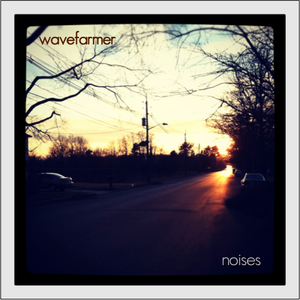 Last fall, New Jersey’s Wavefarmer’s – Sean Quinn and Zak Iannitelli locked themselves in a garage studio and recorded material that would eventually become their EP, Noises. With Iannitelli on keyboards and drum kit and Quinn on vocals and guitar, the duo’s influences range from Genesis, Motown, to the Beach Boys. Noises was released last March and features five songs, including our featured number, The Dirty.

In certain cases, writing songs can mean hitting a few bumps along the way and, in some cases, it can take forever to end up with the desired result. However, this wasn’t the case with The Dirty. “The song was written in an afternoon in Zak’s basement,” says Quinn. “It started with a sort of jam messing around with the delay settings on a DL-4 until we landed on a very unique sweep echo sound. After that the song really wrote itself. The sound and the quick Motown playing style steered the drums into the same direction.”

The song was written about someone both Sean and Zak know personally, a young woman who found out the hard way about the viral powers of the internet. “The Dirty is about a mutual friend who took some rather exotic pictures of herself. Inevitably the pictures were posted online for all the world to see. Needless to say everyone’s perspective of her changed drastically and she forever will be seen in a different light, or a different angle. Of course this isn’t necessarily a bad thing.”

As for the song’s recording, the band feels like the methods used often end up defining the end result, and this was no exception with The Dirty. “We take a unorthodox approach to recording. We record with no set plans and follow the path of how the song evolves itself during the process of making it. It’s a lot less stressful this way and a lot more fun. This approach lends itself to the creative openness we have when making music, which has really defined the Wavefarmer sound.”

“We never have had strategic, set ways of writing or recording,” they add. “But in this case the song came together with a guitar sound and a drum groove and the lyrics were inspired after the music was pretty much set in place.”

Although the band can’t say specifically which artists inspired this particular song, they feel like 70’s music had a big part to play. “The drums are a sort of Stevie Wonder style, playing with the loose pocket groove and with the frequency filters on the guitars, it again has a very 70′s sound to it.”

The band had their close friend Mike Baldo of Vergetone Productions come in to do the mixing and mastering. They recall a specific moment where the song just came together. “We had Vince Tampio come in on all the trumpets, cornets and trombones. From day one we always envisioned a horn section on this song, and after months of recording the rest of the E.P. while searching for the right player(s) for the part, almost last minute we found Vince and the song came together.”

“All those pictures I saw of you/ they just seem so different than anything I can recall about you,” sings Quinn. The Dirty is ultimately a song about how people’s perception of us can change in an instant. “It came from the idea of seeing a person in a way you weren’t meant to, and how that can change your entire perspective about them. Don’t take naked pictures of yourself, but if you do send them to us, maybe we will write a song about you.”

Keep up with Wavefarmer’s upcoming performances on their official website. www.wavefarmermusic.com